SYNOPSIS Dirty Bible Stories explores six of the most disturbing stories from the Bible - from the sexually explicit Lot and his daughters to the hyper-violent homicides of Josiah to the ghoulish resurrection of Lazarus - and views them through the fractured lens of 20th Century American iconography.

Read Excerpt from Seidelman’s “Paul: BH1 Behind the Bible”

PRESS “...this often delightful improv-originated retelling of supposedly shocking tales from the good book...its writers and improvisers prove how close dirtiness is to godliness...In Seth Fisher's loopy contemporary treatment, Lot - a family man who made the mistake of dwelling in the iniquitous Twin Cities - escapes the wrath of two testy angels only to be drugged and raped by his daughters. (Even playfully retold, this is beyond cable TV.) Perfectly cloning VH1, Jenny Seidelman's "Behind the Apostle" exposé of Paul comes complete with impressive video graphics and a hilarious turn by Ron Kuzava as the inevitable rock drummer who got dumped. Dave Stinton's "The Fig Tree" gives Chris Zumwalt the chance to play a Jesus sick of being marketed for miracles. Seidelman's "Deborah" - wonderfully done in clipped film noir style - pays homage to a wily hard-boiled prophetess (Amanda Cohen) who seemingly defeats the Canaanites with wisecracks. The best is last: Stinton's minimusical "Josiah," which peppers the usual lesson of fidelity to Yahweh with melodically enthralling production numbers.”” - Lawrence Bommer, Chicago Reader 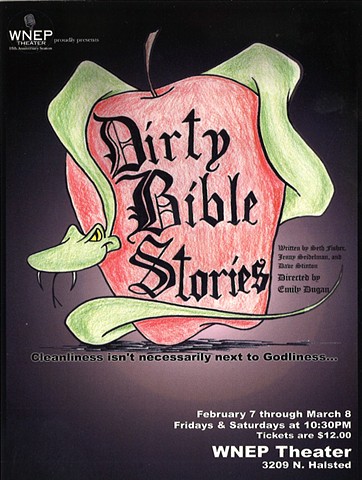 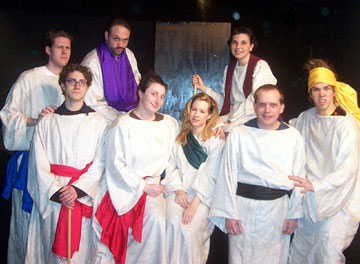 The cast of "Dirty Bible Stories". 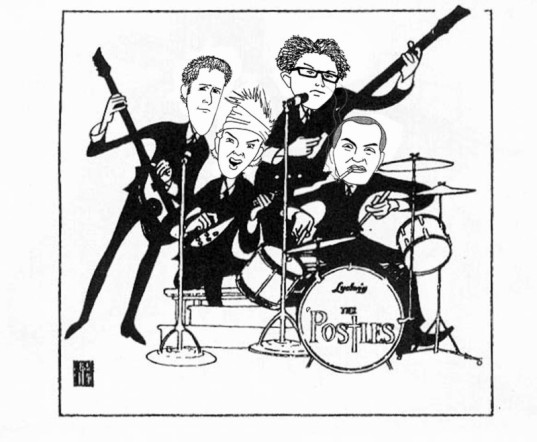 A illustration by Noah Ginex of the cast of "Paul: Behind the Apostle" from "Dirty Bible Stories".